My upbringing was enmeshed in love and laughter, but was not your average childhood. I had a storied time in Alaska, Washington, and Northern California before losing my mother to suicide at fourteen years old. As an adult, I faced three mass lay-offs in the five years after the recession began, followed by a health crisis that lasted years. I’ve also lived in 8 different cities since graduating college in 2005. Whew. 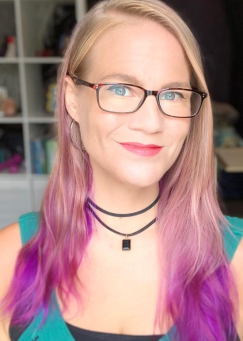 Dealing with all of these choices and events led to lots of shenanigans, risky choices, a brief stint in jail, homelessness, and, eventually and sometimes simultaneously – reflection and lessons learned. (How I Lost All My F-cks is a result of that last bit.)

I fell in love with meditation in 2002 after being introduced in a philosophy course, but really committed in 2012. Mindfulness, its result, is a huge passion of mine. I’m also a very spiritual person, mysticism/divination and transcendental meditation being my biggest touchstones.

I still identify as a spoonie on several levels. I’m a passionate wellness advocate; our medical system is so very broken that we need a new freakin’ word for broken. Cannabis has been crucial to surviving this health debacle, and I’m a strong advocate there as well. (Seems like a good time to say Black Lives Matter, because that cannot be said too much in times like these.) I am one of those “fire in her belly” types, no doubt about it.

I have a Bachelor’s degree in Fine Art from the University of Nevada, Las Vegas. (I also had concentrations in Philosophy and Sociology, swoon.) I’ve shown in many shows throughout the left states, and have been lucky enough to garner many commissions. I’m now lucky enough to call writing my day job, and am bonkers grateful to have been featured in Huffington Post, Leafly, Tiny Buddha, MindBodyGreen, Civilized and Ravishly, as well as others.

In addition to these things, I make a damn fine veggie curry, adore an ocean swim, and have just about mastered the fine art of the blonde-to-purple ombré. I presently live in the awesome Long Beach, California.

BLERGITY BLERG: Another rough week, still staring at my Foxy pup enjoying her sun puddles with great jealousy—#autisticburnout has rendered sun stingy, itchy, and totally draining.
#autisticburnoutrecovery—
EATIN' CLEAN: A while back I shared a rather half-assed post about clean eating, and I'm happy to say that I got a whole-assed article done on the matter.
STILL TROOPIN’: This photo says so much to me, haha, oyyyy.
We got this. ❤️
DARKNESS AGAIN: A fistful of assholes have resulted in another slip deeper into #autisticburnout, when I’ve been doing my everything to get out.