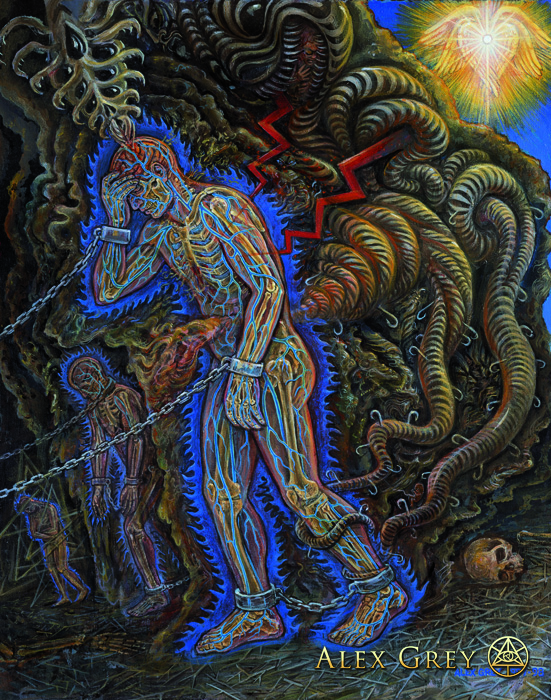 I just came across a Twitter post by Alex Grey that included a pic of one of his gorgeous paintings.  It shows a man being enslaved by self-hatred—something only possible when ruled by ego.  Its caption says, “Hey Ego, your fears and limits are really getting in the way of my higher calling…”  Some guy commented, “that’s certainly rich for someone so active on social media.”

It reminded me that I’ve been meaning to write about ego.  It’s a highly misunderstood concept; people are always talking about smashing it, killing it, generally making it go away—which not only inadvisable, but totally impossible.

What would someone with absolutely no ego look like?  They would only have awareness of connection with others, and with the world around them.  They would be fully embraced in the truth of our Oneness.  They would see no separation between themselves and others, they would truly always see themselves in Other.

Sounds beautiful, eh?  Now ask them their name. Where they live. How they pay rent.  What they like to do with their time.  Etc.

We need ego! Ego serves us in this life, it defines our separateness, and separateness is what we came here to experience.

An unbalanced ego is the troublemaker.

An overgrown ego tells you that you are better than others. It constantly fuels the mind with reasons why others are inferior, why they aren’t as good as you. An overgrown ego is highly defensive, and ignites easily (though not always verbally). It is constantly threatened that someone will remove this sense of superiority, as it is “who I am.”

A diminished ego tells you that you are shit.  You aren’t as good as anyone else.  You don’t deserve the things that you want.  You don’t matter.  It is an Eeyore, but it’s not so cute in human form.  It is a victim mindset.  It will not stand up for itself when hurt, because being hurt has become “who I am.”

A healthy ego is a strong sense of who you are.  You like you!  (You might even promote your work on social media like Alex!)  You see the beauty in others, and appreciate them for just being them.  You see when you fuck up, you try to see the humor in it, and do your darnedest to correct it.

A healthy ego never feels imperiled because it is aware of “I AM”—it is centered and connected whilst maintaining an awareness of the current perspective and its separations.

There’s all kinds of middleground, of course, we rarely hang out in extremes. There will even be days where your ego shrinks and expands in reaction to who and what you encounter! It’s a versatile lil’ bugger, and not one to attempt to squash.

Certainly to keep yer eye on it though! Watch your reactions, that’s where ego really shines. Notice feelings of superiority and of unworthiness, that’s unbalanced ego showing off. Notice these things without judging yourself, and just jump off that there thought train! Eventually, the tracks themselves will change—your mental constructs will adjust.

Get it get it, friends!