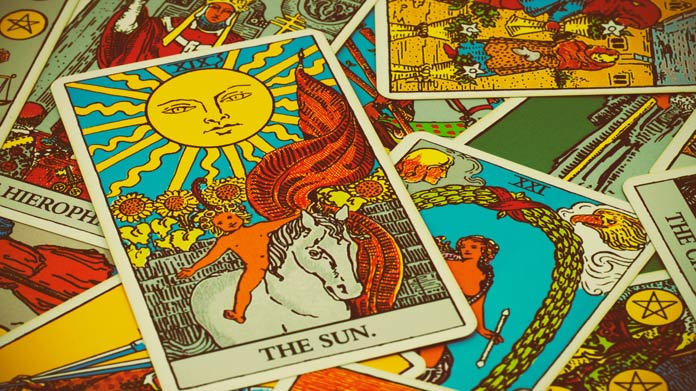 I bought my first deck of tarot cards in 2014, after having my first reading — which had stunned me with its accuracy. Before that experience I had always likened tarot cards to newspaper horoscopes; lots of general advice that could apply to anyone and therefore really didn’t apply to anyone.

But for me, it’s turned out to be a very different story.

To fill you in on the Tarot, it’s a deck of cards that have different meanings. The cards represent 78 different aspects of life, and each comes with guidance. The origin is debated, some saying they go back to ancient Egypt and others saying Italy in the 14th century, with many other guesses. Some play games with them, but my interest is in divination — using the cards for guidance in life.

Even after I bought the cards I was still a bit suspect. I thought that maybe the intuitive reader was just very skilled, and that I probably wouldn’t come up with much on my own. I tried anyways, and within a few days I was shocked at the frequency of certain cards. Over, and over, and over, and over; these same cards would pop up, cards that had serious meaning in regard to my present life.

And four years later, I’m still at it! I draw three cards every morning for guidance on the day, it feels like “flying blind” on the rare occasions that I don’t get my tarot in. I’ve occasionally had others read for me, they tend to expand on what I’ve picked up on my own — and have yet to contradict anything!

Tarot cards don’t predict the future, they won’t be like, “Yo Meg, your shit’s about to take off, your book’s gonna be published, and it’s going to be a cultural phenom.”  But they’ll be all, “A prosperous new time is coming”, or more often, “Work your ass off, honey.”

They don’t say it like that, of course, but most cards do come with books for explanations of the cards meanings; and it’s your job as the reader to feel into how they could apply to your life. I like to meditate while I shuffle for a few minutes, then I just choose the cards that feel right.

Sometimes I draw however many I like, in response to my own questions; like a dialogue with the cards and my guidance. Other times I use traditional card spreads with just one question in mind. I’ve noticed that they seem to respond to my mood — and I no longer draw cards when I’m feeling fearful or upset, it just makes me feel worse!

Tarot has become an insightful and entertaining tool for guidance and inner-exploration in my life. I quite fancy it, and recommend it to anyone who’s even remotely curious. The Rider-Waite deck is the most universal, and a great place to start.